How virtual reality can bring your marketing campaigns to life 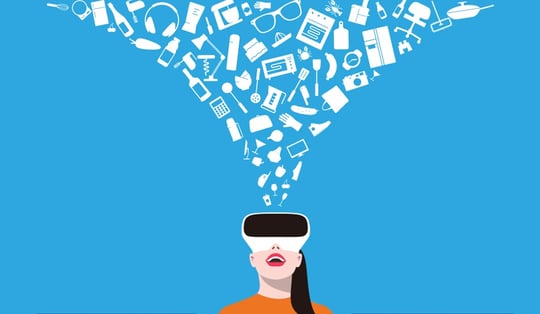 Oculus Rift, Google Cardboard,  and HTC Vive. What do they have in common? They are different virtual reality (VR) headsets that have the potential to change the way you market to your customers.

The headsets have introduced new technology that businesses can take advantage of. They enable users to enter realistic, simulated, three-dimensional environments. From a beach in Bora Bora, French Polynesia, to the Amazon jungle, the possibilities are endless and usage is on the rise.

For example, the International Data Corporation (IDC) has estimated that spending on virtual and augmented reality will increase from $11.4 billion in 2017 to $215 billion in 2021. But what impact does this have on marketing?

The fully immersive nature of VR allows you to command your audience’s attention, as opposed to the few seconds you might be lucky enough to grab otherwise.

In fact, some VR campaigns have gained considerable traction and demonstrate product functionality and brand ethos.

TOMS Shoes  - “One to One” promise

For every pair of TOMS shoes that are bought, the footwear brand will help one person in need.

This brand promise was centre stage in 2015 when the brand  decided to use VR in their Venice Beach, California, US flagship store.

Customers that chose to wear the VR headset were transported to a village in Peru, where TOMS were handing out free shoes to locals.

In addition, in 2016, the company built on the success of its VR campaign when celebrating its 10-year partnership with telecoms firm AT&T.

Together, the brands introduced a new VR experience called “A Walk In Their Shoes”. It was showcased at  several events across the United States, and focused on TOMS helping locals in Colombia.

This activity helped position TOMS as a company with integrity that delivers on its promises.

Guests across Los Angeles and London were given HTC VIVE Business Edition headsets to experience the I-PACE Concept forming around them part by part.

Audiences could sit in the front and the back of the car, taking in the interior first-hand, all whilst Ian Callum and Ian Hoban - two of the car’s creators - talked them through the different stages from design to technology.

After the event, the VR content was made available on a dedicated Jaguar app so that consumers could experience the I-PACE Concept at home, too.

What better way to launch an innovative vehicle that looks to the future, than with the latest forward-thinking technology?

With the rise of digital content and technology, many newspapers have struggled to retain their readership numbers.

The New York Times recognised that it needed to try and expand its repertoire beyond traditional storytelling methods. In 2015, it gave away over one million Google Cardboards to its home delivery subscribers.

After downloading the New York Times VR app onto their phones, readers could use their Google Cardboard to watch “The Displaced”, an 11-minute VR video that focused on the lives of three displaced children in South Sudan, Syria and the Ukraine.

Before the release of the VR video, Jake Silverstein, editor-in-chief of the New York Times Magazine, said : “The majority of people still see VR as a gaming platform, so seeing it used in a really powerful and kind of classic journalistic sense is interesting [and] will really open people’s eyes.”

“The Displaced” won the Entertainment Grand Prix at the 2016 Cannes Lions Festival and it was only the beginning of the New York Times’ investment in VR, as last year, it announced the launch of 360-degree VR stories on its daily news feed.

For more information on how technology is being used in marketing, read our blog “10 years in the blink of an iPhone”.

Lucy graduated from Leeds College of Art, where she studied BA Creative Advertising, a degree which focused around the creative concepts behind advertising campaigns. She has since clocked up over five years of account management experience focusing on digital platforms, digital strategy and campaign work.