Marginal Returns and the Case for Simplicity in Marketing

Any human group, from small teams to large civilisations, requires energy and resources for its maintenance and continuous development.

The process can be expressed as follows:

This is how Tainter visualises the relative benefits and costs of complexity over time: 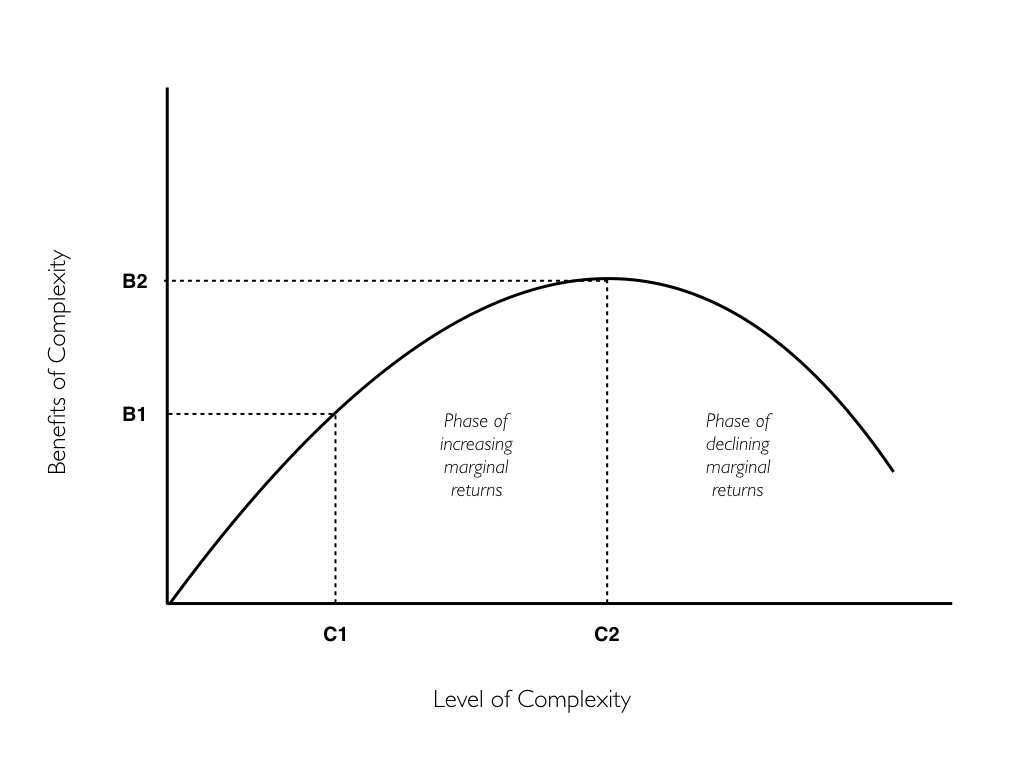 In practice, this pattern is consistent regardless of the activity of the system in which it is embedded. For example, the cost of education increases in direct proportion to the degree of specialisation and complexity. Any parent will observe how quickly babies and young children learn. They assimilate large volumes of general information at a rapid rate. Because much of this early learning takes place in a home environment, the cost of learning is low and the marginal returns of the learning process are high. However, as we get older, generalised learning becomes less valuable as the demands for specialised knowledge increase. This leads to increased complexity as the value of general knowledge declines, the marginal cost of education increases and its marginal returns decline.

The same process applies to information. Where available information is scarce or in decline, each unit of data increases in value. In modern economies where there is a bewildering glut of information, the cost of processing information increases as does the rate of data redundancy.

As complexity increases, marginal returns decrease. A key marker of this process is an increase in non-productive, administrative roles within organisations. The British civil naval historian, Cyril Northcote Parkinson created an eponymous law that sought to explain how a decline in ship building between 1914 and 1928 was accompanied by a substantial increase in Admiralty officials and clerks: 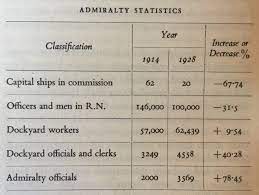 Growing bureaucracies drive complexity. This creates a feedback loop which leads to a spiral of increased costs and declining marginal returns. If this is not addressed it leads to a systemic crisis.

It is, therefore, imperative, that businesses understand the relationship between the logic of declining marginal returns and marketing investment. A failure to do so will result in a churn of marketing agencies in the futile quest to unlock marketing value without addressing the fundamental problem of complexity. Unless complexity is addressed, each agency relationship will begin with a perfect storm of a progressive decline in available cash to invest in marketing combined with increased pressure to get results. As desperation fuels unrealistic expectations, it’s only a matter of time before an organisation believes that marketing is a waste of money.

Initially, the only organisations able to withstand this spiral of inefficiency will be large corporations who have a greater ability to absorb declining marginal returns but, eventually, they will also need to evaluate their marketing strategies. However, unless businesses understand the ruinous effect of complexity, any strategy they create will underperform.

At Cognition, we have demonstrated that effective marketing can be built on the following principles:

Left unchecked, increasing complexity becomes terminal for the systems that produce it. One of the main examples Joseph Tainter uses is the Roman Empire.  As the empire expanded, administration costs rose and by the fifth century there were 30,000 civil servants, their number increasing at the expense of, among other things, adding new legions to the Roman army. This led to increased taxation and a debasement of the currency with the silver content of the denarius declining from 91.8% in the reign of Nero (54-68 CE) to 58.3% in the reign of Septimus Severus (193-211 CE).

If declining marginal costs can ruin an empire, they can easily ruin your business. The first step to extracting increased marginal returns from marketing is, therefore, to use psychology, neuroscience, research and statistics to look inside your buyer’s mind and create a strategy that reduces complexity. When you do this, the likelihood of exceeding your targets and outperforming your competitors increases exponentially.

Join us on the 30th June where the first ever Aston University and Cognition Agency conference will take a look inside your buyer's mind.

The event will have inspiring and informative talks by leading psychologists and neuroscientists from Aston University’s School of Psychology, Warwick University’s Business School and Cognition Agency. Among the topics covered will be Web3 and HubSpot.